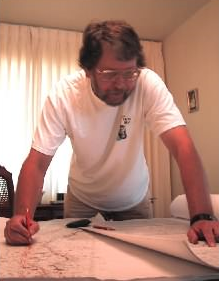 I’m Terry J. Crebs, a California Registered Geophysicist who’s been “reading between the mines” now for over forty years. Summarized below is my mining and geophysics experience.

I began my mining career in the late 1960’s working Kennecott’s Bingham Canyon UT porphyry-copper mine. During the 1970’s I received my BS and MS degrees in mining geophysics from the University of Utah. In the late 1970’s and 1980’s I worked for The Anaconda Company conducting both borehole-geophysical research and mineral exploration. From 1985-1993, I was senior geophysicist for Atlantic Richfield Corporation and designed/interpreted gravity, aeromagnetic, MT, and 3D-seismic surveys for oil/gas exploration throughout the western US.

From 1994-1996, I was Chief Geophysicist for Diamond Fields Resources, Inc. during the discovery and evaluation of the world-class Voisey’s Bay Ni-Cu-Co deposits of Labrador, Canada. I also led DFR’s exploration programs in Greenland and Europe.

Since 1997, I’ve been a freelance consulting geophysicist based in Lakewood, Colorado USA. In the last twenty years, I haven’t discovered any orebodies as exciting as VB, but HEM surveying of layered intrusions and AEM surveying for Canadian kimberlites often look promising.

While I have extensive experience in uranium, epithermal, and porphyry mineralization, my passion and most recent successes are mafic and ultramafic magmatic-sulfide mineralization, PGE’s, and diamonds.